Durga Ashtami or Maha Ashtami is the most awaited occasion for Hindus. Ashtami falls on the eighth day of Navratri and considered as most auspicious among all the nine days. This traditional festival reunites people of different religions into the one Indian culture. In earlier days, the festival was celebrated only in the state of Bengal but now, the festival is celebrated with so much zeal and fun in all over the country and somewhere in abroad too. The famous Ashtra Puja is none other than a custom to worship Goddess Durga’s weapons with which she ended the evilness.

There are so many rituals which are performed through the day. Some of the popular rituals are statue immersion and Kanya Pujan in the last four days of Navaratri. The goddess with ten arms riding the lion is worshipped with great enthusiasm and devotion. It falls on the eighth day of Chaitra month, according to Hindu calendar. 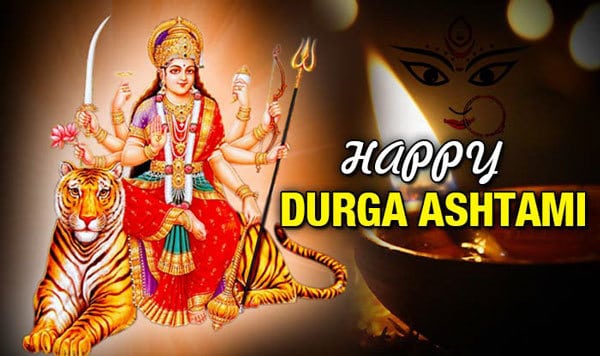 There is a number of stories regarding this festival and some of the most popular are:

It is believed that once there was a demon king named Mahishasura who was threatening to Gods of heaven. He was very powerful and difficult to be defeated by all the Gods. Then the biggest three gods Brahma, Vishnu, and Mahesh created the eternal power named the power as Durga. On the tenth day, the demon was finally killed by her and that day is known as Dussehra or Vijayadashami.

The other story connects the day with Lord Rama. According to the Ramayan (a Hindu religious book), Ram performed the Chandi Puja in order to get the blessing of Mata Durga to kill the Ravana. Lord Rama also killed the evil power Ravana, the king of Lanka on the day of Dussehra and from that day, the festival originated and is celebrated every year now also.

The festival has a great significance in the country of India. After battling for continuous nine days, Maa Durga defeated the evil power. So, those nine days are called Navaratri. People celebrate in different styles. Goddess Durga is believed as the goddess of strength and power. It is the symbol of removing negativity from the universe. The festival is more popularly celebrated in the places such as Assam, Tripura, Bihar, Mithila, Jharkhand, Orissa, and yes West Bengal.

Preparation for the Puja

As this is one of the greatest festivals of India, the preparations start a month before the date of the festival. People start decorating their houses and pandals where the Puja will be done. The market seems completely crowded as a huge number of people believe that shopping in these nine days is very pious. They buy sweets and fruits which will be offered to goddess Durga on the Puja day. A businessman sees these days as an opportunity and many sale offers are launched by the shops to increase their sales. The festival is welcomed and loved by every individual.

The festival is gaining more and more popularity day by day. Earlier, it was just celebrated in the four walls but now, the culture has been completely changed. The arrangements are done on a large basis as huge pandals and stages are decorated with lights and flowers. Everyone celebrates this festival together with great zest and zeal.

Devotees keep the fast for all the nine days. Different functions are organized throughout the nine days, in which dance performances are given, singing of devotional songs is done and different games are played. Prasad is made in the homes, including common food like Khichadi, Papad, Roshogulla, etc. which is first offered to goddess Durga and then distributed among devotees.

Sandhi puja is performed in the evening on the last day. The time lies for only 24 minutes, which is believed at most auspicious time in the entire nine days.Another popular ritual among Indians is Kanjak Puja. In this puja, nine girls are worshipped and welcomed into the house for eating the Prasad including Puri, Chole,and Halwa. Nine girls are seated in a line with one boy called Bhairuji. Their feet are washed and moli is rolled on their wrists. Some follow this ritual on the day of Asthami while some on the Navami, the ninth day.

Date and Time of the Puja

In the year of 2018, the Durga Ashtami will be coming on the16th of October and the day on which it lies is Tuesday. The Shubh Muhuratbegins at 00:46 pm on 16th October and ends at 03:19 amon 17th October. You should know the important date and time if you plan to keep the fast.

These were the important facts about the festival of Durga Puja. Different Puja is being done in these nine days. If you worship the Goddess with clean and true heart, the goddess will surely bless you.