Dussehra is known as Vijayadashmi, Dashain or Dasara is an important Hindu Festival. It is celebrated with mirth and enjoyment. The celebrations go on for 10 days where 9 days are celebrated as Navratri Festival and on the 10th day, Vijayadashmi or Dussehrais celebrated by burning the idols of Ravana, Meghnath and Kumbhkaran in the Ram Lila procession or fair. Many fairs and dramas take place and people play the role of Ram, Lakshman and Sita. These festivals are celebrated by everyone regardless of the religion and cultural background. It is during these festivals that the feeling of brotherhood and unity can be seen. In the year 2018, this festival will be celebrated on 19th October. 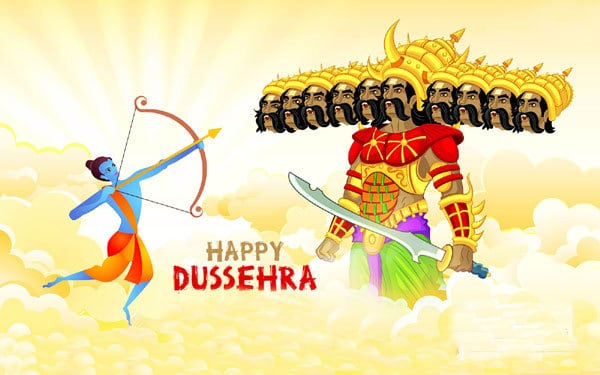 This festival has a huge significance for Indians. This festival is celebrated as the mark ofthe triumph of good over evil. Dussehra is a very unique festival and is celebrated all across the country for various reasons. One of the Story is linked to Rama and Ravana Dahanand the other is linked with Goddess Durga. It is believed that Ravana abducted Sita and took her to Ashok Vatika in Lanka. She was imprisoned there and in order to bring her back, Ram fought with Ravana for 10 days. On the 10th day, Ravana got killed by Ram along with his son Meghnath and Brother Kumbhkaran.

Another story which is associated with Dusshera is of Goddess Durga who killed the demon Mahisasura. This demon had the boon from the Gods that no man could ever kill him. He got so powerful that he even defeated Indra Dev. Eventually, all the Devas combined their divine energies and thus Durga Devi was born and killed the Demon riding the lion. Also, it is believed that Lord Rama worshipped Chandi or Goddess Durga to get Her blessings in order to kill Ravana.

It is also believed that people observe fasts during the nine days where they learn to control over Rajas, Tamas and Sattva. After the completion of nine days when the individual has conquered it all, it is Vijayadashmi. So this festival is not restricted to rejoicein the success of Lord Rama or Goddess Durga but also of an individual over these bad qualities.

This festival is celebrated with great fervor and enthusiasm. It is also celebrated for different reasons in the different parts of India. Also the ways to celebrate are different in all the parts of India. So you can choose as per your preference. Some of the rituals performed on the day are Shami Puja, Seema Avalanghan and Aparajita Puja. These are mostly done during the muhurat of Aparahna Puja time.

In North India, people burn the huge figurines of Ravana, Indrajit (Meghnath) and Kumbhkaran. A procession is held where a chariot carrying Lord Rama, Sita and Lakshman pass through the crowd and the person playing the role of Rama, burns these statues one by one. Ramleela is organized in the country, mostly in villages, where people enact the plays and plots of Ramayana. In Delhi, Ramleela is organized in various parts of the NCR. Kullu Dusshera is very famous and folks from all parts of the country come to this small Himachali town to witness this week long celebration.

In Gujarat, kids, women and men dress up nicely and dance every night for these 9 days called as Navratri. Lots of dance and other kinds of competitions are also organized. The dance performed by people is called Garba and the songs are mostly devotional. People decorate their houses and celebrate this festival with great enthusiasm. In some places, people dance the entire night. In Rajasthan’s Kota, three-day fair is conducted which ends in on the day of Dusshera.

In South India, three Goddesses, Lakshmi, known as the Goddess of wealth and prosperity, Saraswati, regarded as the Goddess of knowledge and learning and Durga, the Goddess of power and strength worshipped. People decorate their houses with earthen lamps and floral rangolis during the sunset. Mysore is well known for its Dusshera celebration as it is celebrated great style with pomp and show.

In West Bengal, Goddess Durga is worshipped and this festival is called Durga Puja. The victory of Goddess Durga over Demon Mahisasura is celebrated and on the 10th day, Sindoor and sweets are offered. The idol of Durga is then immersed in water with a heavy heart. It denotes that she is taking away all the miseries of her children.

Worshipping on this day is known to bring prosperity and success to your life. This victory of truth over evil gives a message to the entire world. This message is pretty appropriate in today’s time where people are only willing to pull the legs of others.