The ‘Parv’ of Gudi Padwa is regarded as the most promising day of the whole Marathi year. People who are in Maharashtra try to begin their important tasks, investments or ventures just from this day the day also is the harbinger of the Season, Spring. Farmers, on the other hand, plough their ground on this day, as it is their belief that this will convey a good production in an upcoming year.

Gudi Padwa is mainly the occasion of fun and joy. Such a colorful festival fills the mind of people with love and joy. Intensifying the bond of relationships, Gudi Padwa is all about accelerating the delights of life. A Gudi is also raised on this event giving this festival its apt name. 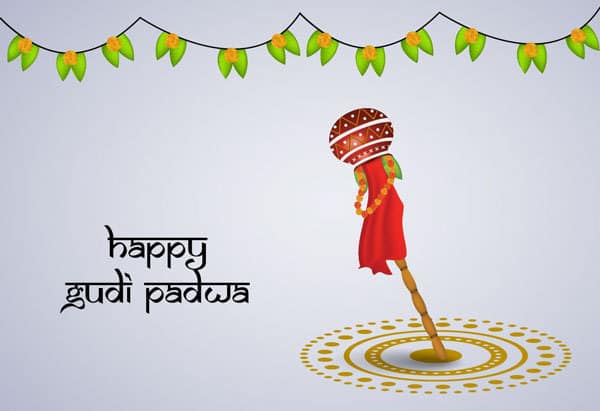 Gudi Padwa initiates the beginning of Chaitra Month that also is the beginning of the New Year. Gudi Padwa, one of the most renowned festivals of harvesting marks the ending of one Year according to Hindu lunisolar calendar. India follows the practice of agrarian civilizations where farming is the main occupation of the individuals. The season for ushering the new. Hindu Mythology also mentions the day the holy day when Ravana was defeated by Lord Rama regenerating happiness to Ajodhya.

This is the tradition to make Maharashtrian food on this day consisting of Puri, Shrikhand, and Puran Poli. Kanangachi Kheer is one kind of a sweet dish made by the Konkanis during the festival. The dish is made from sweet potato, jaggary coconut milk, and rice. Buying gold or a new vehicle or any new thing is considered to bring wealth if done on this day.

The method and some vital puja materials:

The ritual begins with an oil bath chasing the prayers in the morning. Oil bath and Neem leaves are a custom which is also suggested by scriptures. After having the oil bath, you have to make a simple Rangoli at the entrance of your house. In front of the puja place, a swastika sign should be made with Haldi- Kumkumand Rangoli.

The entire arrangement of Gaudi hoisting is performed outside each family, normally to the right corner of the threshold. The whole performance should be visible to everyone. Villages and all neighborhoods come jointly hosting a community known as Gudhi Kavad, which they carry collectively to the neighboring Shiva temple.

The festival of Gudi Padwa marks the Marathi New Year. It represents the triumph of King Shalivahanaover Sakaswho was raised by his followers when he was back to ‘Paithan’.

Historically, the Gudhi signifies the victory of Lord Rama and the celebration also ensures the happiness among the followers of the king on returning to Ajodhya defeating Ravana. Since the festival implies a sign of victory so the flag is held high always.

Gudhi is believed to protect against evil, attracts prosperity and good luck in all the families.

In 2018, this great festival of Gaudi Padwa will start on 28thMarch at 8.26am in the morning and will remain till 5:44 pm on 29thMarch. The timings of the Amavasya, according to the calendar and will end at 8:27 am in the morning. It is very remarkable to mention that the Padwa days will start on 18thMarch 2018.