In the childhood days, often your night stories include texts from popular fairy tales and mythological episodes. The ear soothing tell-tales of Ramayana, Mahabharata and Holika simply ignite interest in you to know more about these fabled characters.

In this context, let’s give you a brief on the celebrated mythical epitome in the form of Holika. It is said that Lord Vishnu put her to death because of the wicked deeds and devilish determination which is elaborated as Holika Dahan.

Let’s eye out some facts like the ritual of performing the puja, the best timing and the importance of celebrating Holika Dahan. 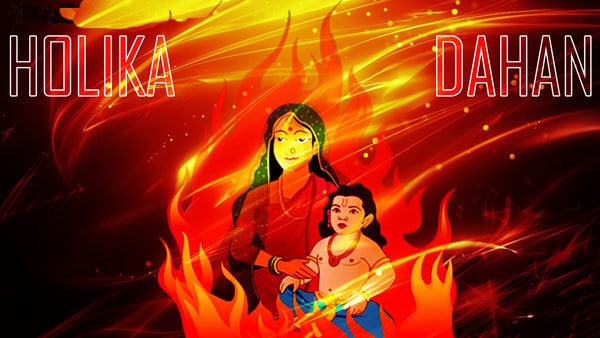 The importance of performing Holika Dahan

Well, to get into the roots of Holika Dahan, you have to get the flashback of the incident. First of all, Holika was the sister of Hirayana Kashipu. Being a demon ruler, Hirayana Kashipu had an ardent aspiration of gaining eternal powers. Eventually, his earnest dedication made his get some blessings from Lord Brahma which gained him as the most powerful on the earth.

Well, the boons he was awarded literally safeguarded him on land, sir water, he could neither be killed by any weapon nor anyone can kill him. This blessing actually turns out to be an oblivion for others as he started to assume him as the super power and started to kill all other people.

On the contrary, his son was quite different to his character who used to worship Lord Vishnu instead of adoring his father as a God. Now he planned to put his son out of his way, in order to do so, he decided to take an assist from his sister Holika.

Now Holika received some power like getting immune to fire from Lord Brahma but as per the boon, she was asked not to cause injury to any creature. But one day, she was asked to sit in the midst of fire along with her nephew Lord Brahma which Prahalad. She wore a shawl and her nephew was on her lap. In the meantime, Prahalad started to chant the name of Lord Vishnu, his blessing blew the puff of winds which actually put off the shawl from Holika and guarded his devotee. Thus Holika was burnt in the holy fire.

Significance: Now Holika Dahan prominently highlights the importance of playing Holi, it actually means the smearing of colors. It is done in the honor of Lord Vishnu and his loyal devotee Prahlad.

The essence of Holika dahan in different states of India

Prior concentrating on the vidhi to perform the Holika Dahan, you should be mindful to the list of the states where the corpse of Holika was burnt before the day of Holi in areas of Northern and southern India.

Other than that, Holi is celebrated with pomp and glory in parts like west Bengal which is signified as Dol Yatra. In addition to that, another state like Orissa, where it is celebrated in diverse styles. Like in Mathura and Vrindavan, deities of Krishna and Radha is also worshiped.

Just the days prior to Holi, men and women start garnering the essential like the wood, but these are piled much earlier say before forty days. In addition to the wood, other branches of trees, twigs are also collected in advance, on the day of Vasant Panchami, the people do select a spot where the burning is to be done.

Mostly on the day of the Holika Dahan, deities of Prahlad and Holika are crafted and are on the placed on the fire. Now the worshipers start to chant the hymns from the Rakhshoghna extracted from the popular Rig Veda. These are done with great dedication in order to cast away the evil from any place. Once the effigies along with the woods are burnt, people do collect all the leftover ashes.

Later, they do rub that on the limbs which actually symbolize purification of the soul and body. In addition to this, people are also seen singing and dancing by circling the pyre. The story tells you the saga of devotion, trust, and loyalty. Along with that the lighted fire essay the saga of triumph over wickedness

One thing you would notice that the burning is usually done in an open area adjacent to any park or temple. Besides indulging in the fire lighting the people do celebrate the day with other materials like colors, they even pile up Sweet Confectioneries, Gujiya, Mathri and other seasonal fruits. Other moreish dishes like Malpuas are also served before the deity of Radha and Krishna as well.