Invented by Erno Rubik’s to help his architecture students learn 3-dimensional figures, he came up with the idea of Rubik’s cube which turned out to be revolutionary in the world of toys.

Exciting and mind-stimulating, A Rubik’s cube has several benefits ranging from improving critical skills, problem-solving skills, and analytical skills, to helping in getting rid of minute bad addictions such as nail-biting or hair picking. Moreover, practising Rubik’s cube continuously helps in improving dexterity and finger movement.

It has also been scientifically proven that solving Rubik’s cube helps in relieving anxiety and stress.

Over the years, Rubik’s cube has gained a lot of popularity amongst people. There have been several tournaments and challenges that revolve around this magnificent twisty puzzle.

Some challenges are so quirky and exciting that the audience gets on the edge of their seats while experiencing these amazing challenges. Challenges like solving cubes underwater or while hanging upside down, in fact, there are challenges such as solving Rubik’s cubes while juggling or with both hands and feet. 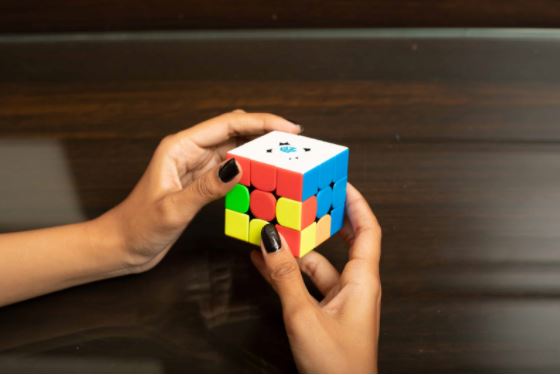 But, the one challenge or tournament that stands out is not just unique but also a tough nut to crack.

Basically, we need to see in order to solve the Rubik’s cube right, after all, there are so many colours that are to be aligned together, right? But what if we blindfold the one who is solving the Rubik’s cube. Challenging, isn’t it?

So, one of the toughest challenges that have been conquered in the world of Rubik’s cube is to solve the cube blindfolded. And this challenge has been achieved by Sarah C.

Sarah C is a girl from Chennai, who is just 6 years old, broke the record in 2019 by solving the Rubik’s cube blindfolded and made the Guinness world record.

Solving a Rubik’s cube is a great deal and blindfolded is just impossible.

Solving Rubik’s cube is really a tough task. Where it takes us a week to get to the right solution of the Rubik’s cube, these kids solve it as if it’s just a piece of cake.

With the several benefits that a Rubik’s cube has to offer, it is also one of the greatest hobbies that one could take during the lockdowns or simply while staying at home. Moreover, Rubik’s cube could be a fun parent-children activity that parents could venture onto with their kids and spend some quality and intellectual time with their kids.

Mind-stimulating and relaxing, Rubik’s cube is a portable twisty puzzle that could be slid into your pocket and could be taken with you anywhere and anytime. It’s basically your mobile pass-time device.

Moreover, once you are done with solving a regular Rubik’s cube you can shift onto solving different variations of the cube, such as axis cube, mastermorphix, snake cube, ghost cube, and many more. These different variations of cubes offer a vivid curiosity and excitement while solving and also helps in experiencing something new in terms of twisty puzzles.

So, this weekend get yourself a great quality Rubik’s cube and enter the world of cubes.