Just when people are done with celebrating the festival of lights, comes another important Hindu festival which marks the love and respect between brothers and their sisters. This festival is celebrated during the Shukal Paksha in the Indian month of Kartik and since it happens two days after Diwali, it is considered as the last day of Diwali Celebrations. It is on this day, the sisters pray to the God for the happy and long lives of their brother by putting a tika on their foreheads. Brothers also give presents to their sisters and reaffirm their virtuous bonds of affection and love. In some places, it is known as Bhathru Dwithiya and Bhau Beej. It is celebrated widely in India as well as in Nepal. Bhai Dooj is celebrated with great devotion and passion. In literal terms, “Bhaiya” means brother and “Dooj” means second day after new moon’s arrival on Diwali. 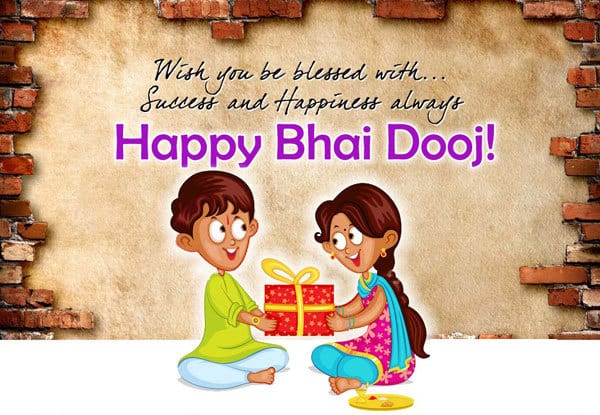 This festival has a great significance for the Hindus. The sisters are excited for this day as the brothers shower their love and affection in the form of gifts and presents. It is related to two stories of the past which depict the pious relationship between brothers and sisters. These two stories will surely be heartwarming and bring a lot of happiness to the hearts. These legends are passed on from generations and are revered by the people.

This festival is celebrated as it is on this day that Lord Krishna made a visit to his sister Subhadra after defeating Narakasura on the day of Diwali and, she welcomed him by putting a tika on his forehead as a sign of victory and offered him sweets and flowers. It is after this that the ritual of Bhai Dooj commenced.

Another story is about Lord Yamaraj who visited his affectionate sister Yamuna (Yami) on this day after a long time. As she got the news she got so happy and welcomed him with Aarti, Tilakam, and offered sweets and garlands. He got very touched by her gesture and declared that any brother who shall receive a Tilak by his sister, would never be frightened. This is the reason behind calling this festival as Yama Dwitiya.

Generally, this festival is celebrated two days after Deepawali. The Shubh Muhurat for the Bhai Dooj Tika lasts for 2 hours and 8 minutes. Starting from 1:09 pm to 3:17 pm. It will be celebrated on the 9th of November in the year 2018.

The rituals are mostly similar to that of Raksha Bandhan. The sisters perform the arti before putting on vermillion tika on the foreheads of their brothers and in return the brothers bring gifts for their sisters. Sisters feed their brothers with their favorite and other special meals on this day. Though the rituals vary from place to place, but the motive behind this ritual remains the same.

In some places, brothers are made to sit on a seat made by their sisters out of the rice flour. They apply vermillion and rice on their hands and worship. After that flowers, betel nuts and betel leaves are offered along with coins. Water is being poured on the palms and mantras are chanted. Kalawa is tied on the wrist and Tilak is put on the forehead. Sisters then lit a lamp in the southern direction requesting long lives of their brothers. It is also believed that if the sisters see a kite flying, their wishes are fulfilled.

In Maharashtra and Haryana, it is very obvious that the festival shall be celebrated, so in case the girl has no brother, can worship the Hindu Moon God. They create beautiful mehandi designs on their hands as this is the day of tradition and customs. Also, if the brother is away, sisters pray to Moon God for his long life and happiness. Brothers also reciprocate through gifts and money.

In North India, this festival is called Bhaiya Dooj and held two days after Diwali. Also celebrated in Uttar Pradesh and Bihar by Awadhis. In West Bengal, it is known to celebrate along with the Kali Pooja on the first and second day and is known as Bhai Phonta. In places like Karnataka, Maharashtra and Goa, it is known as Bhai Beej or Bhai Bij. Talking about Nepal, Bhai Tika as it is called, is considered an important festival after Dusshera. Majorly people belonging to the castes of Chhetri, Tharu, Newari and Bahun celebrate this festival and sisters pray to the Lord of Death – Yamaraj for the long life of their brothers. This festival is also called Yamadvitiya, Bhatri Ditya and Bhatru Dviteeya as people also worship Yamaraj.

People enjoy this day with their friends and family. Sweets are served and the entire family comes together to sing songs, play games and eat the sweet dishes.