India is often called the land of festivals. As you know, there are so many festivals celebrated across the country. There is no month in which a festival does not lie and each and every festival is celebrated with the same energy and joy. Janmashtami or Gokulashtami is one of the major religious festivals of Hindu. Krishna is considered as the eighth avatar of Lord Vishnu. Usually, this festival lies in the month of August and September. The festival is celebrated with a number of different traditions like Dandia is played, dance performances are prepared and devotional singing is done on this day.

The festival is more popular in the northern region including Mathura which is said as the birth place of Krishna. The birth of Krishna is being celebrated for the 5100 years. On this pious day, pilgrims visit the temples to offer the prayers and bhog (food or sweets). 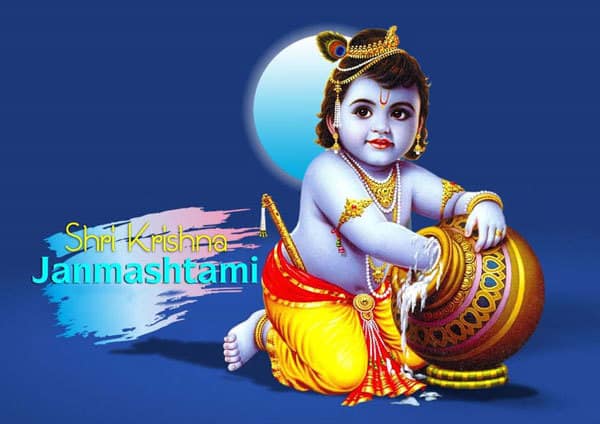 Janmashtami has a great significance for devotees as on this auspicious day, Krishna took the birth. The Mathura kingdom was under deep miserly and peril under the harsh king named Kansa. His little sister named Princess Devaki married to Vasudeva with much splendor and joy. But one day, it is believed a cloud roared and warned the cruel king Kansa that the eighth son of his sister Devaki and Vasudeva would be the cause of his death. Without waiting for a minute, Kansa threw them both into a jail called Karagar.

King was so merciless that he killed all the six children of the mother Devaki. The seventh child was transferred mystically by the God to the princess Rohini in Vrindavan who grew up later as Krishna’s elder brother. When the eighth child born that was Lord Krishna and Vasudeva were guided by the God and carried the child protecting him from heavy down rainfall and Vasudeva, a man with great courage placed the child in the house of Nanda and Yasoda.

Vasudeva replaces that child with the girl child and later that girl child was handed over to king Kansa believing that he will not kill the girl, but he was so cruel and tried to throw the girl but it was goddess Durga which warned king Kansa about his death.

Puja Vidhi and other celebrations

Devotees fast the whole day as they don’t eat a single cereal made food. They spend their time in singing religious songs and decorating the idols of Lord Krishna. The festival is full of fun and entertainment. The fast is broken on the next day when Asthami Tithiis over. The Chappan Bhogis made which is offered to Lord Krishna. It is nothing other than different 56 dishes which is distributed among devotees after offering to the God. Some of the favorite dishes included in Chappan bhog are Malpua, Jalebi, Makhan Mishri, Rabri, Rasgullah, Saag, Milk, and Dry-Fruits.

The actual celebration of Janmashtami is done in the midnight. As it is believed that Lord Krishna was born in the dark, rainy and stormy night to end the evils. In India, functions are organized to celebrate this festival in the midnight. The celebration in the cities of Mathura and Vrindavan are a must watch festival in one’s life. It is a beautiful sight to look at the beautifully decorated temples with lights and flowers.

Dahi Handi is one of the popular events!

Actually, the word Dahi-Handi means curd in an earthen pot. The activity is enjoyed all over the country, especially in the state of Maharashtra. Lord Krishna used to love the dairy items such as curd, butter, and milk. Thus, his one of the names is Makhan Chor which means butter thief. So, to save the Makhan, his mother used to keep that butter high, where he can’t reach. This gave the rise to this sports activity Dahi-Handi. In this event, a group of boys makes a pyramid and try to break that pot which is completely filled up of Makhan and which teams break it first, is considered a winner. The topmost boy who breaks the pot is called as Govinda and other team members are called Mandals.

The date and the time of Puja

In the year of 2018, the festival will be coming on 2nd September and the day will be Sunday. It is the 5245th birth anniversary of Lord Krishna. The Shubh Mahuratwhich is Nishita Puja time is from 24:40+ to 25:24+ and on third September, the Parana time is from after 10:35 pm. The day is considered as one of the most pious days of the year.

These were the important facts of the festival Janmashtami. You should know the date and the Puja time, so you can keep the fast and do the Puja Vidhi in time. Buy all the required things before time. The God Krishna surely blesses the one who worships him with a clean heart.