A popular festival celebrating the pious bond of brothers and sisters is celebrated across India with great enthusiasm and joy. Sisters tie a sacred thread around the brother’s wrists and pray to God for their long life and prosperity. In return the brother gives her gifts and sweets and promises to protect her for entire life. Literally, Raksha Bandhan is a combination of two words – Raksha which means protection and Bandhan which means a bond. It is also known as Rakhi Purnima as it falls on the day of the new moon. Other well-known names of this festival are such as in the Western India it is called as “Nariyal Purnima” as the full moon looks like coconut on this day. In the parts of Southern India, this festival is celebrated by the name of “Upakarmam” and “Avani Avittam”. It is quite interesting that not only Hindus but people from other ethnicities also celebrate this festival. 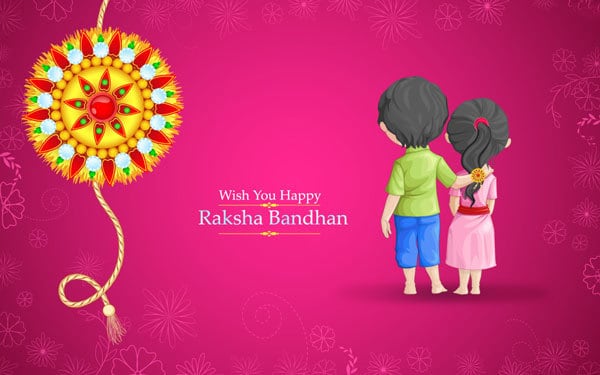 Raksha Bandhan is not only restricted to the bond of brothers and sisters, but it could be anyone such as parents, friends, partners etc. There are instances of such kind in the history. This festival has a great significance in the mythology as well as the history of India.

One of the stories is related to Lord Krishna and Draupadi. Krishna had vowed to pardon one hundred offenses of Shishupal. But during the Rajasuya Yajna, Shishupal insulted Lord Krishna and committed 100 sins. Krishna killed him by hurling his celestial weapon, Sudarshan Chakra, at him. During this act, his index finger got hurt and as the blood dripped, Draupadi then tore a piece from her saree and draped around his finger which stopped the bleeding. Touched by this gesture, Krishna asked her for a promise and she asked him to be with her forever. Everyone is aware of the pious bond between Draupadi and Lord Krishna. During the Mahabharta, Krishna protected her when the cruel Kauravs tried to disrobe her.

According to Vishnu Puran, Lord Vishnu won the three worlds from King Bali. Bali got so impressed with Vishnu that he requested him to stay at his palace which of course Vishnu could not refuse. Somehow, Goddess Lakshmi was not very comfortable and wanted to return Vaikuntha along with her husband. So she went up to Bali and tied a rakhi. As she made him her brother, he asked for a gift, to which she said that she and Vishnu be allowed to go back to Vaikuntha. Of course, this was accepted and consented by Bali.

It is very interesting to note that the wife of Macedonian King Alexander the Great, tied the Rakhi to King Puru or Porus so that he doesn’t kill her husband. She was aware of the strength of Porus and also of the customs and traditions of India, which is why she approached Porus with a rakhi.

Another interesting story from the past of India is when Emperor Humayun was sent a letter and a Rakhi from Rani Karnavati of Mewar as Mewar was under invasion by Bahadur Shah Zafar. Humayun got so touched that he left everything to protect her despite of being from different religion.

This festival falls in the Hindu month of Shravan on the day of new moon. In the year 2018, Raksha Bandhan will fall on 26th August. The best time to tie Rakhi on the Raksha Bandhan day is between5:59 am to 17:25 pm. The entire muhurat will last for 11 hours and 26 minutes.

As per the Indian traditions, this festival is celebrated when the sister decorates her plate with Rakhi, diya, incense stick, sweets, roli and rice and worships the god for the well being of her brothers. After that, she ties aRakhi to the wrist of her brother and in the return, brother promises to stick by the side of the sister. Brother also gives a present in the form of cash or gifts. Many people fly kites on this day. In Nepal, this festival is called as “Janai Purnima” and there is a ceremony which follows. These rituals may be different from one region to another, but generally are observed with the same intention.

It is also very noteworthy that many NGOs and online portals in India have started recognizing the efforts of Indian Defense services. You can send Rakhis to these army men protecting our nation from the atrocities of other countries. These army men stand in the coldest temperature and miles away from their families so their efforts and pains should be recognized by all at large.

If the sisters or brothers are living away from each other and cannot come together to celebrate the festival, the sisters can still arrange to send the rakhi to them. There are a number of portals which even specialize in sending the personalized Rakh is to the brothers.